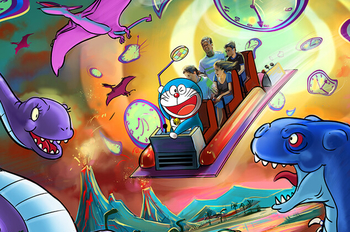 Time Travel can be difficult. Between the constant risk of creating a paradox or becoming trapped in another time, uncomfortable questions about causality and free will, and unexpected difficulty using verb tenses, this much is clear. But one of the difficulties rarely discussed is how to portray the act of traveling through time on-screen in a way that makes clear to the audience that time travel is, in fact, occurring. Sure, you could always just have someone from the present day enter a time machine then cut to them emerging in a scene that visibly takes place in a different era, but sometimes filmmakers want to portray the actual transition between the two in a way with a bit more pizazz. So what does time travel look like?
Advertisement:

In a word, clocks.

Yes, you heard us right. Clocks. And not just your garden variety Spinning Clock Hands either. No, this is something entirely different. For some reason, the "space" you travel through when traveling through time looks like a surrealist dimension filled with giant, floating, semi-transparent clocks that fade in, drift vaguely towards the camera and then fade out again, ticking loudly all the while, only to be replaced by another, visibly different clock, all hovering upon a celestial backdrop resembling a starfield, hyperpsace, or in extreme cases, the Acid-Trip Dimension. This sequence rarely lasts more than about a minute, and can often resemble a faster-paced, more clock-oriented version of the opening sequence from The Twilight Zone (1959). Less serious works will often include an obligatory cuckoo clock and/or kit-cat klock.

Much more rarely, an Exploding Calendar may appear as well.

It is extremely rare for the characters to notice or comment on the clocks, and it usually isn't specified whether these clocks actually physically exist in the setting, or if they're just an elaborate form of Painting the Medium (though the latter is usually assumed). When the clocks are commented on, it's only for the purpose of Lampshade Hanging, and the hows and whys of the their collective existence are never addressed.

A bit of a Dead Horse Trope nowadays as it's considered too "goofy" for serious time travel stories, although it still shows up a fair amount in children's cartoons.