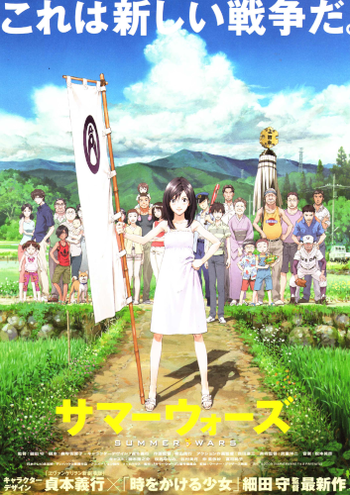 "Always protect your network!"
"The worst things in this world are being hungry and being alone."
"Technology is only as good as the user."
Advertisement:

Summer Wars is a 2009 anime Science Fiction and Slice of Life film. The film focuses on a timid eleventh grade math genius named Kenji Koiso (voiced by Ryunosuke Kamiki) who has been falsely implicated in the hacking of a virtual world and, with the aid of classmate Natsuki Shinohara (Nanami Sakuraba) and her extensive family, must prevent the real and computer simulated worlds from colliding. It was produced by the Japanese animation studio Madhouse and was directed by Mamoru Hosoda. The film also stars Mitsuki Tanimura as Kazuma Ikezawa and Sumiko Fuji as Sakae Jinnouchi.

The project was first announced without a title at the 2008 Tokyo International Anime Fair, and the first trailer of the film was released in April 2009. Audience interest was fueled primarily through word of mouth and Internet publicity. Two manga adaptations of the film were published ahead of the film's release in Japan and South Korea. Funimation acquired the distribution rights to the film, and has set it up with some of their biggest names in ADR dubbing. FUNimation also set up a theatrical release in select cites starting in December 2010, and a DVD and Blu-Ray release in February 2011.

The film is similar to the same director's earlier work, the Digimon feature film Our War Game! (2000), released in English as part of Digimon: The Movie. The premise of an internet virus causing real world problems is similar and the artistic design of The Metaverse is shared between both films, depicting the virtual realm as a white void decorated with floating two-dimensional shapes in which all characters have red outlines, as well as with "Superflat Monogram,"

It has a manga spin-off: Summer Wars: King Kazma vs Queen Oz, a prequel which focuses on Kazuma.