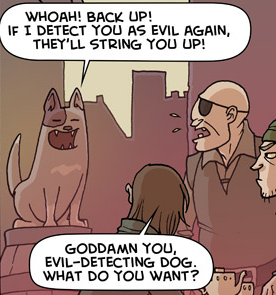 "[Mouse] was possessed of the uncanny wisdom of beasts for knowing whom to trust."
— Harry Dresden, narrator of The Dresden Files, Dead Beat
Advertisement:

Slightly more justified in the myths and folklore, from which fantasy/fiction roots of this tropes derive: animals cannot be fooled by illusions cast by otherworldly creatures, and thus can see things like ghosts, demons in disguise etc.. Many cultures (starting with ancient Egypt) considered cats able to see into the underworld, while dogs were believed to be able to not just detect, but also harm demons. Horses were said to smell vampires and evil djinn.

Compare this trope with Evil-Detecting Baby and Pet Positive Identification. Not to be confused with Even the Dog Is Ashamed. If the dog can detect the supernatural, it's because of a Glamour Failure. Contrast Licked by the Dog, where this is used to show the audience a good guy instead of a villain. Then again, sometimes they aren't detecting evil at all, and it's simply that Animals Hate Him. Closely related to Scare the Dog. Sub-trope of Excellent Judge of Character. Often overlaps with Asian Lion Dogs and Cats Are Magic.