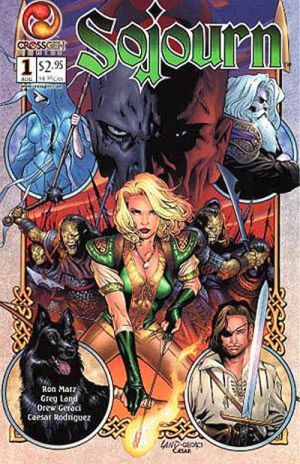 The story is set in a Standard Fantasy Setting which is beset by a Dark Lord, Mordath, who came back from the dead. It follows the journey of two archers, Arwyn and Gareth, who are accompanied by Arwyn's dog, Kreeg, and helped by a mysterious sorceress, Neven. They must find the five fragments of an arrow that once killed Mordath to end his rule once and for all, while they are ceaselessly chased by Mordath's trolls.

Sojourn is also part of CrossGen's Sigilverse. Unfortunately, after 35 issues (including a prequel), it was cancelled due to CrossGen's bankruptcy in 2004.

This Comic Book Contains Examples Of: