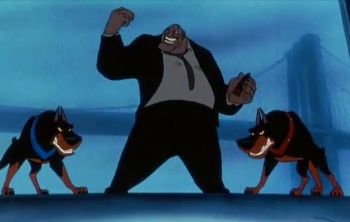 It helps if you have a Left-Hand Attack Dog to go with the right.
"You've no doubt seen a dog lose its mind when a stranger comes near its home. That territorial instinct is multiplied as their territory expands. If a dog's home is several acres of farmland, it greets every visitor with primeval murderous instinct. Growing up, if we wanted to get home safely from the bus stop, we had to fill the weakest child with dog poison. An encounter between country dogs contains no comical ass sniffing — it's a snarling cartoon cloud of mortal combat."
— Seanbaby
Advertisement:

In contrast to the generally sedentary Right-Hand Cat and the common stereotype of Heroes Love Dogs, this is what happens when the villains' pet plays an active role as a guard/weapon against the heroes. Expect Fluffy the Terrible in terms of naming and for the villain to be a confirmed Fluffy Tamer. Typically, villains will either show a Nightmare Fetishist streak and be oblivious to how savage their pets are, and will treat them kindly, or else, they will use the pets to (perhaps even literally) Kick the Dog, sometimes by feeding underlings and other poor unfortunates to them. Finally, as the title suggests, when the creature in question isn't a fantasy animal, it's (not necessarily but) very likely to be some kind of canine (usually a Vicious Angry Guard Dog).

Dogs are very faithful and loyal to humans, and given most villains are humans, they also tend to own and love dogs as their loyal companions. As so, the dogs tend to have strong Undying Loyalty to them, and will follow the Diabolical Mastermind's orders. In addition, dogs are pack animals who are also very prone to attack strangers and random visitors due to their lineage, making them the perfect attack animals for the villains while retaining loyalty to them. Cats on other hand are solitary animals who can be fickle and sometimes can betray the villains' loyalty, so some villains don't see them fit.

Heroes who dare to mess with these dogs, on other hand, may receive full-on retribution from them.

May or may not be a Post-Apocalyptic Dog.

The Stapler is the only one of the Legion of Stationary kept close to Olly, as it is the thing keeping all Folded Soldiers folded. It is very doglike and Olivia repeatedly refers to it as such.

The Stapler is the only one of the Legion of Stationary kept close to Olly, as it is the thing keeping all Folded Soldiers folded. It is very doglike and Olivia repeatedly refers to it as such.