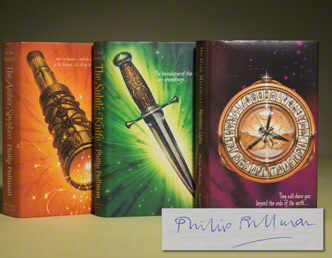 “Without stories, we wouldn't be human beings at all.”
Advertisement:

His Dark Materials is a Fantasy trilogy by Philip Pullman made up of Northern Lights (original UK title) a.k.a. The Golden Compass (its US title), The Subtle Knife and The Amber Spyglass. Omnibus volumes containing all three volumes have appeared.

Pre-teen Lyra Silvertongue (originally Belacqua, but she soon disowns this name due to the events of the first book) lives in an alternative Gaslamp Fantasy world (Zeppelins!) in which people's souls live outside their bodies in the form of Dæmons, which take on animal forms according to the person's personality. She leaves her life as a wild child roaming Jordan College (not actually a real Oxford University college, but this distinction is intentional), Oxford, to go on a quest to save her best friend who has been kidnapped.

Lyra encounters a boy from our world named Will Parry, and the two of them find themselves involved in a war involving all worlds that will change the very fate of The Multiverse and all who live in it...

Pullman has also written several spin-off works: sequel novella Lyra's Oxford (published as a separate book), prequel novella Once Upon a Time in the North (published, again as a separate book) and a prequel short story "The Collector" (released on Audible.com). The publication of a follow-up trilogy, The Book of Dust, commenced in 2017 with La Belle Sauvage; the second volume, The Secret Commonwealth, was released in 2019, with the conclusion as yet unscheduled. It serves as both prequel and sequel (described by Pullman as an "equel").

The first volume had a 2007 film adaptation, entitled The Golden Compass, which was not successful enough to warrant any sequels. The latter two books were not adapted as a result. Apart from this, there have been a two-part stage adaptation of the trilogy and two radio adaptations, one an unabridged recording of the books (with Pullman himself narrating and a full cast playing the various characters) and one a more traditional radio drama presented in three two-and-a-half-hour episodes.

The books were adapted into an BBC/HBO television series, His Dark Materials. It started airing on BBC One in the UK on November 3rd 2019, and HBO (everywhere else) the following day.