Crack in the Sky 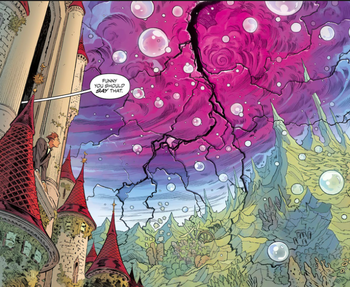 "Today's forecast: Cloudy, with a chance of reality falling apart."
They looked. After a moment of disbelief, the group realized that there really was a crack in the sky. It began at the crown of the tree, then climbed up like a lightning bolt stopped midstrike. Several hundred feet above the building, the break spiderwebbed outward, forming six jagged lengths of ruptured spacetime. Even as the ponies watched, those cracks began to widen, forming a disturbingly familiar six-pointed star. The sound of the plane breaking apart was gradually supplanted by the howl of air getting sucked into the breach.
— Elementals of Harmony
Advertisement:

A Crack in the Sky is a (usually jagged) rent or rift in the sky, as if the atmosphere was a physical dome with a gap in it. If one is seen during the daytime, it's normally black; at night, the crack is usually brilliant white instead.

Its appearance typically signals that something very, very bad is happening, and that whatever caused the break is powerful enough to mess things up on a metaphysical scale — that the very fabric of reality is about to fall to pieces. Sometimes, this may also signal a breakage in whatever keeps dimensions separate from each other, allowing things to come through the newly opened gap.

In real life, this is of course impossible (the sky isn't a physical object capable of breaking), but it doesn't prevent it from happening in fiction.

Compare Screen Tap, when it's the fourth wall that cracks. See also The Stars Are Going Out for another sign of doom that happens in the sky. Subtrope of Signs of the End Times. A Cosmic Flaw may manifest as one.