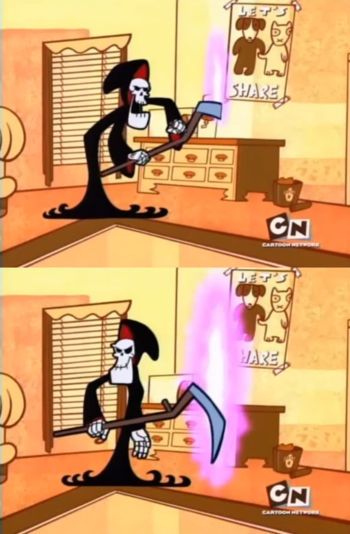 "Despite the existence of the Nether Portal, few believe that it is possible to open such rifts with sheer force alone. None believe that a tool with enough power to accomplish such a feat could exist. And yet..."
— The description for the Cataclysm weapon, Wynncraft
Advertisement:

Space and time can be described as fabric, so what better way to manipulate it than by cutting it? Usually a bladed weapon or claws are used for such a purpose, sometimes noted to be an Absurdly Sharp Blade, but this could be done with any natural or artificial cutting implement.

The common purpose for cutting the spacetime fabric is to create portals that can move you (and/or others) from point A to B. However, this can be used offensively, such as cutting a target from far away or cause a version of Tele-Frag onto the target.

The Full-Contact Magic version of Thinking Up Portals. A subtrope of Interdimensional Travel Device. Compare with Teleport Gun. Not to be confused with Portal Cut although the two can overlap dependinding on context/situation.