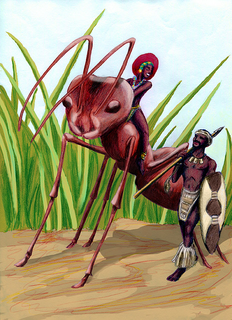 A common science fiction and fantasy character type, these are Proud Warrior Race Guy meets The Napoleon, and named for the miniature race encountered in Gulliver's Travels. These are little people, typically antagonistic to humans but not always, who are a source of humor because of the contrast between their Hot-Blooded manner and minuscule size. There's always something amusing about seeing a full grown man having his ass kicked by someone four inches tall.