Literature / How to Build a Skydeck 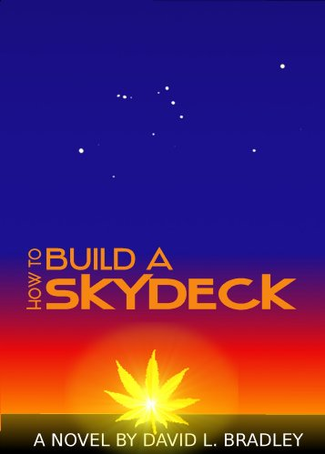 It's not that kind of how-to book
"There's no leave of absence in service of the Universe."
Advertisement:

Stan Davis is a nineteen-year-old white laborer working on an all-black construction crew in the Deep South town of Columbus, Georgia in The '90s. After getting kicked from the nest, he moves into a trailer park renting a room from an older woman named Rebecca. Through the power of cannabis he becomes fast friends with his dorky, middle-aged neighbor Pete, who reveals to Stan that he may not be all he seems. Meanwhile, two Feds named Delacroix and Dickerson are being sent on a mission down in Columbus on mysterious orders from their superior to locate a person using a strange machine known only as The Device. Can Stan manage to realize his place in the Universe before the Feds complete their mission? What is the Device and who are they after? And where is Pete getting all his good pot?

How to Build a Skydeck is a science-fiction novel by Southern author David L. Bradley, written in 1998 and re-published in 2012 through Amazon for both paperback and digital download. Described as "a pre-Digital Age tale of black and white, rich and poor, pot-smoking aliens, angels and God," the small-town setting and blue-collar characters lend themselves to a very heartfelt and insightful story of race, class and philosophy in a type of science-fiction that's hard to come by.