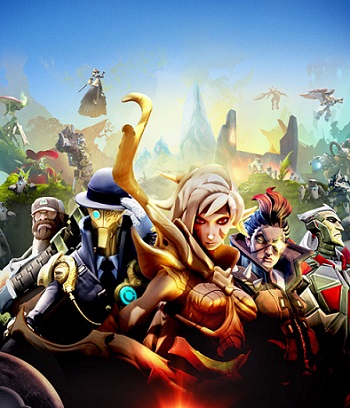 Not Pictured: How much they hate each other
"For every kind of badass."
Advertisement:

Battleborn was a futuristic Hero Shooter/MOBA hybrid from the folks at Gearbox Software, creators of the mind-bendingly popular Borderlands franchise, that launched on May 3, 2016. The game follows numerous factions currently vying for control of the Solus System, the last remaining star in the universe. As these groups struggle for the only source of energy remaining, a much larger issue looms, namely the unstoppable horde of star-eaters, the Varelsi. Good luck with that.

Tonally, Battleborn could be considered a Spiritual Successor to Borderlands, featuring a dark setting and premise, contrasted with a self-referential sense of humor, Comedic Sociopathy, and cartoony visuals. However, its gameplay took a lot of inspiration from the MOBA genre, featuring 5v5 battles with unique champions and NPCs to grind for loot and experience. The main twist to this is the perspective, as the game takes place in first person.

Battleborn featured a large starting roster of 25 playable heroes with additional, free heroes after launch. The characters page can be found here.

The game could be played through two main ways, Story Mode and Competitive Multiplayer:

Additionally, further PvE comes in the form of five DLC Story Operations. Story Operations were side stories that expand on some Battleborn heroes' lore and can played either solo or co-op with up to two buddies. They are shorter than the main Story Missions and highly replayable with dialogue, enemies, and objectives changing depending on how many Ops points are collected in a current playthrough. Furthermore, subsequent replays of a story operation will increase in difficulty to provide more challenge though difficulty can also be reset down by talking to Nova near respawn points to suit personal preferences. Each playthrough also moves towards unlocking more lore, skins, titles, and taunts depending on how many Ops points are collected at the end. The Story Operations were:

On June 6, 2017, the game added a Free-to-Play multiplayer update known as Free Trial

. Free Trial allows unlimited access to all competitive multiplayer modes and the same character and account growth and progression one would find in the full game. Free Trial players will have access to a subset of Battleborn's unique heroes through a rotating roster of six heroes that changes weekly. Heroes can be unlocked and kept from the in-game Marketplace using Credits earned while playing matches, or through Platinum premium currency. Players if they so choose can upgrade to the full base game which includes unlocking all 25 base characters, all Story Mode missions as well as the Prologue, and permanent access to private matches. Additionally, all player progression stats will carry over upon upgrading to the full game. On September 15, 2017, Randy Varnell, the game's creative director, announced

the upcoming Fall update will be the final content update to the game.

On November 25, 2019, it was announced that Battleborn would be shutting down. The Platinum currency became unavailable to purchase after January 2020, and the game's servers shut down on January 31st, 2021. Due to the nature of the game's design, even the single player campaign has become unplayable.

Tropes that apply to Battleborn