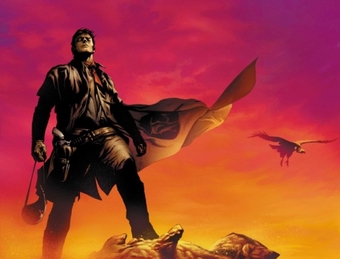 A Longcoat is the ideal action-hero garment, more practical than a cape but infinitely cooler than a sport coat or no coat. Also, a Longcoat of any level of "billowy-ness" makes an ideal cover for producing any number of weapons, tools, supplies, and whatnot. Certain styles of Longcoat are deliberately designed to distort the wearer's frame, making their wearer's access to Hammerspace almost believable to mundane eyes. This distortion of the wearer's real shape also makes it genuinely harder to land an accurate attack on them.

Like capes, longcoats capitalize on the dramatic effect of having something that flutters behind you. It's especially effective in animated or drawn material, where the coat can be shown billowing a lot more than it could in real life (and a lot more stylishly) — to the point that it really does look like a cape. A variant involves jackets and excessively long shirts, but having less material to billow in the gusts necessarily makes such people seem less badass. And of course, when the wearer of a Badass Longcoat takes the coat off, it's a sign that he's about to do some major damage — he just doesn't want to get your blood on his coat. Additionally, a longcoat in fiction is rarely worn closed, and many are cut in such a way that closing them is impossible, giving the illusion of a broader chest and more masculine figure.

The most common types of long coats are dusters,

An older variant of the trenchcoat is the greatcoat,

a predecessor of the trench coat but usually much heavier, and with either a wider collar that can be turned up to protect against the wind or a short shoulder cape. Later greatcoats lost the cape, becoming a longer, heavier, double-breasted overcoat, but retaining the name. Greatcoats were typically worn either buttoned, losing some of their badassitude for style, or simply draped over the shoulders without putting the arms into the sleeves, greatly increasing their badassitude. They're most often associated with 19th Century naval officers, Nazi SS officers, and Russian soldiers.