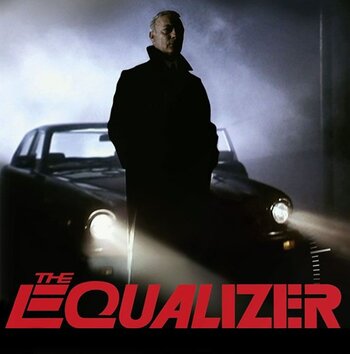 This Cool Old Guy can equalize the odds in your favor.
"Got a problem? Odds against you? Call The Equalizer."
— newspaper advertisement.
Advertisement:

An action-adventure television series originally broadcast on the CBS Network between 1985 and 1989. It starred British actor Edward Woodward as Robert McCall aka 'The Equalizer', a retired spy who assists people in need by way of atoning for his past actions as a premier agent of the... er... 'Company'. Yeah, that's the ticket.

The character's past is never fully revealed to the audience, but is implied to be full of amoral shadows and secrets. He is a ruthless and pragmatic man, a killer many times over — but also a sensitive and honorable man, whose humanity has somehow survived years of terrible disillusionment. The series' expert juxtaposition of all of these elements — and the flat refusal to apologise for or justify any of them — is what has made it a cult classic. (Well, that and the cool Stewart Copeland soundtrack - check out the intro

In keeping with this dedication to the grey areas, the Equalizer's clients are usually average New York City citizens seeking protection from stalkers, neighborhood hoodlums, abusive husbands, corrupt politicians, crooked businessmen and other largely untouchable villains. His fees are nominal and frequently waived altogether, while his services inevitably go far beyond simple bodyguarding.

A standard episode generally begins with the Equalizer convincing his reluctant client that hiring what appears to be a Brit-accented Charles Bronson is a good idea — or, occasionally, explaining why 'just shooting them all' is not the answer — and ends with the execution of a complex (and often cruelly ironic) extended mindgame that leaves his opponents so crazed that they're either sobbing for mercy or forcing McCall to shoot them in self-defense. There is not a lot in the way of redemption, on this series, and what there is has been hard-earned.

He is helped in his investigations by contacts acquired during his intelligence years, ranging from scientists to mercenaries. Notable among these — more so in later years, when health problems forced actor Woodward to slow down — is recurring sidekick Mickey Kostmayer (Keith Szarabajka), a junior agent who doesn't quite understand what drives McCall's crusade but is ferociously loyal anyway (it's stated in one episode that Mickey had been convicted of fragging his superior officer, and McCall proved his innocence). McCall also reluctantly does assignments for his former boss, known only as Control (Robert Lansing), who in payment turns a blind eye to this wholesale 'borrowing' of Agency personnel.

As of 2016, all 4 seasons have been released on DVD in both US and Europe. However, the US release has many of the songs, and some of the score removed, or replaced (copyright stuff).

A film of the series, with Denzel Washington starring as McCall, was released in 2014, and had a sequel in 2018. In 2020, CBS ordered a modern reboot of the show starring Queen Latifah.