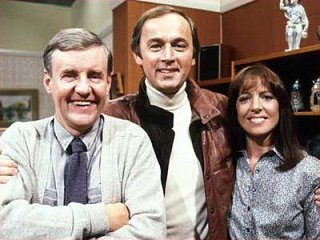 From left to right: Martin, Paul, and Ann.
Advertisement:

Ever Decreasing Circles was a BBC1 sitcom written by John Esmonde and Bob Larbey as a vehicle for Richard Briers, the star of their previous hit The Good Life, which aired for four series between 1984 and 1989. Briers plays neurotic control freak Martin Bryce, a middle manager at a valve manufacturer who organises a wide variety of social and cultural activities for the Close, a housing development in an unnamed London suburb.

The lives of Martin and his long-suffering wife Ann (Penelope Wilton) are turned upside-down when laid-back, charismatic hair salon owner Paul Ryman (Peter Egan) moves in next door to them. Martin soon feels his position as "leader" of the Close is under threat from the multi-talented Paul, for whom everything seems to come easy, often courtesy of one of his many casual friends. Other characters include fellow Close residents Howard and Hilda Hughes (Stanley Lebor and Geraldine Newman), an eccentric middle-aged couple always seen wearing matching jumpers.

Much of the series revolves around the one-sided rivalry between Martin and Paul; although Paul is never anything other than friendly toward Martin, Martin resents both the ease with which Paul seems to accomplish everything and the minor changes he suggests to the established routine (such as sitting at a different table to their usual table in the local pub). However, he remains largely oblivious to perhaps the biggest threat of all to his way of life: the unspoken romantic tension between Paul and Ann.

In the triple-length series finale, Martin's employer merges with another firm and he is transferred to a new office in Oswestry; though initially reluctant to leave the Close, he is swayed when Ann reveals that she is carrying their child.

Although, as a "sofa sitcom" in the 1980s, it was somewhat at odds with a comedy landscape populated by such series as The Young Ones and Blackadder, it drew audiences of over 12 million at its peak, and Ricky Gervais has named the series as a personal favourite.note  When Richard Briers passed away in 2013, Gervais tweeted an offer to the BBC of letting them rerun The Office (UK) for free if they also reran Ever Decreasing Circles.