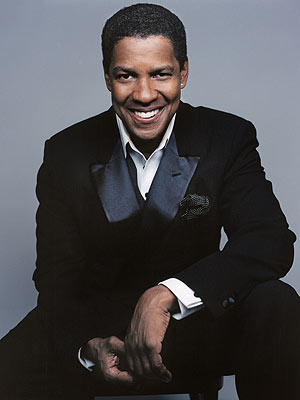 King Kong ain't got shit on him.
“I say without hesitation that Mr. Washington is the finest young actor that I have ever known. At age 22, he has the potential for being one of the outstanding actors of the latter part of the twentieth century. If there is such a thing as genius, then I assure you Mr. Washington is one. I believe even now he is the best actor I have ever known or seen, and God only knows where this can take him.”
— A letter a recommendation from his acting instructor, Robert Stone, in 1977note Washington still carries the original copy of the letter with him in his wallet.
Advertisement:

Although his first major role was on television, in the classic '80s Ensemble Cast Medical Drama St. Elsewhere, Washington has garnered much critical acclaim for his work in film since the late 1980s, including for his portrayals of real-life figures, such as Steve Biko (Cry Freedom), Malcolm X, Rubin Carter (The Hurricane), Melvin B. Tolson (The Great Debaters), Frank Lucas (American Gangster) and Herman Boone (Remember the Titans). In case you're wondering, he's been approached to play Martin Luther King Jr., but he's declined for fear of the Typecasting that kind of role would create.

Washington has been awarded three Golden Globe awards and two Academy Awards for his work. He is notable as the second African American man (after Sidney Poitier) to win the Academy Award for Best Actor, which he received for his role in the 2001 film Training Day. He starred as John Creasy in Man on Fire, followed by leading roles in the 2006 thriller Déjà Vu (2006), the 2009 remake of The Taking of Pelham 123, and the 2010 post-apocalyptic action film The Book of Eli. He also played Joe Miller in Philadelphia, which was the second big-budget Hollywood film to present AIDS, homophobia, and gays in a realistic and thoughtful light.

For his 2012 film Safe House, he allowed himself to be water-boarded for real to make the performance more realistic. His next film was Flight, which came out in November 2012, and for which he was nominated for another Oscar. He would later be nominated for Fences and Roman J. Israel, Esq.. He also produced films without starring in them, such as Ma Rainey's Black Bottom.

He is the father of fellow actor John David Washington.

Example of:
You Wouldn't Shoot Me