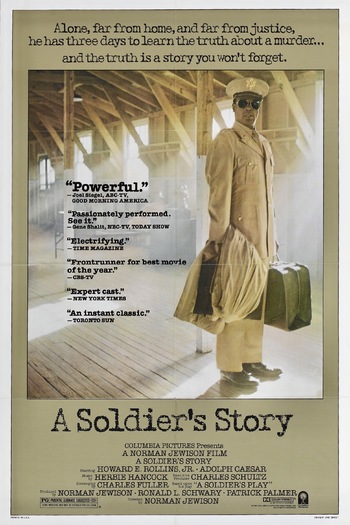 "The worst thing you can do, in this part of the country, is pay too much attention to the death of a negro under mysterious circumstances."
— Colonel Nivens
Advertisement:

A 1984 wartime drama/mystery film directed by Norman Jewison, A Soldier's Story was adapted by screenwriter Charles Fuller from his own Pulitzer Prize-winning 1982 off-Broadway play A Soldier's Play, which was also a loose Setting Update of Billy Budd. The film stars Howard E. Rollins Jr. and Adolph Caesar, with a supporting cast that includes Denzel Washington, Dennis Lipscomb, Art Evans, Larry Riley, and David Alan Grier; Caesar, Washington, and Riley had all originated their roles in the play. Jazz great Herbie Hancock composed the film's score.

The setting is the segregated black U.S. Army base of Fort Neal, Louisiana in 1944, during World War II. Master Sergeant Vernon Waters (Caesar) has been murdered by an unknown shooter. Captain Richard Davenport (Rollins) is sent in from the JAG Corps to investigate the killing. At first, the Ku Klux Klan or racist white soldiers are suspected of the crime. Through his investigation, Davenport discovers the truth that racism indeed played a part, but not in the way he was expecting...