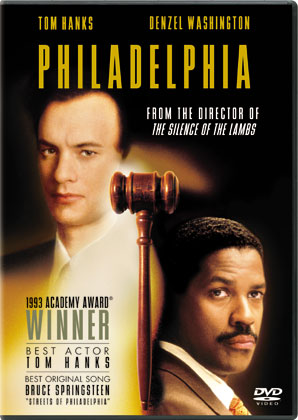 The film centers around a man named Andrew Beckett (Hanks), who is an up-and-coming lawyer until his employers figure out that he has AIDS. Then an important complaint is suddenly misplaced and his contract is terminated on that account. Suspecting that his disease was the true cause of his firing, Andrew approaches an old rival lawyer named Joe Miller (Washington) to plead his case in a lawsuit for discrimination. The two eventually team up to fight Andrew's firm while Joe struggles with his own homophobia and Andrew himself fights a losing battle against his disease.

Philadelphia is notable as one of the first Hollywood movies with a large-scale distribution to bring up the subject of AIDS. It won two Academy Awards: Tom Hanks' first for Best Actor in a Leading Role (he won another one year later for playing the title role in Forrest Gump), and Bruce Springsteen for Best Original Song ("Streets of Philadelphia"). It was notably Hanks' first successful dramatic role (following Nothing in Common and Every Time We Say Goodbye, both flops), resulting in a major career shift from comedies to drama and naming a trivia-trope.