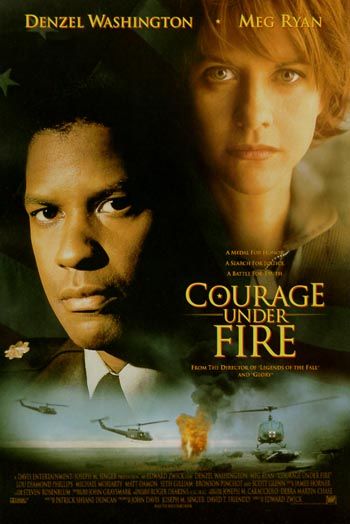 Lieutenant Colonel Nathaniel Serling (Washington) is tortured by an incident he was involved in during combat in the Gulf War. He was an M1 Abrams tank battalion commander who, during the nighttime confusion of Iraqi tanks infiltrating his unit's lines, gave the order to fire, thereby destroying one of his own tanks and killing his friend Captain Boylar. Out of remorse, he has resigned himself to a desk job.

His latest assignment is to decide whether Army Captain Karen Emma Walden (Ryan) should be the first woman to receive (posthumously) the Medal of Honor for valor in combat. She was a helicopter pilot who saved the lives of the crew of another helicopter that was downed, after which she and her crew were downed themselves. Said latter crew was rescued the next day, but by then Walden was dead.

It is Serling's job to go and speak with the surviving crewmembers to discern what happened during the night and thus decide whether Walden deserves the Medal or not. It all looks as though it will be straightforward... but then the surviving crewmembers offer differing explanations for what happened, and differing descriptions of what Walden was like... and Serling, haunted by the way the Army has swept his own responsibility for the tank incident under the rug, refuses to be part of doing the same with someone else.