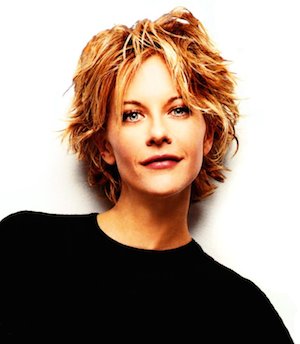 Margaret Mary Emily Anne Hyra (born November 19, 1961 in Fairfield, Connecticut), better known as Meg Ryan, is an American actress and producer best known for her starring roles in Romantic Comedy films such as Sleepless in Seattle, When Harry Met Sally..., and You've Got Mail.

For a time she was married to Dennis Quaid, and this marriage produced one son who is also an actor, Jack Quaid. She also has an adopted daughter, Daisy.

Films she has appeared in with pages on TV Tropes:

TV series she has appeared in with pages on TV Tropes: