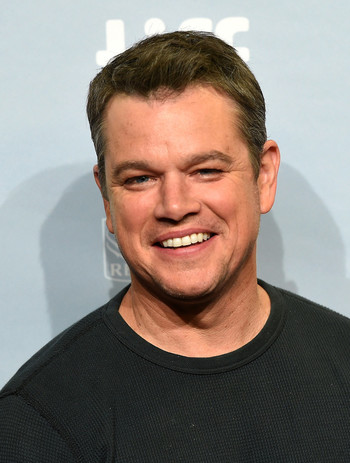 MATT DAMON!
"Some people get into this business and they're so afraid to lose anything. They try to protect their position like clinging to a beachhead. These actors end up making really safe choices. I never wanted to go that route. If I go down, I'm going down swinging."
Advertisement:

Matthew Paige "Matt" Damon (born October 8, 1970 in Cambridge, Massachusetts) is an American actor whose career was launched following the success of the film Good Will Hunting, from a screenplay he co-wrote with BFF Ben Affleck. The pair won the Academy Award for Best Original Screenplay and the Golden Globe Award for Best Screenplay for the work and Damon garnered multiple nominations for Best Actor for his lead performance in the same film.

Damon has gone on to star in films such as Saving Private Ryan, The Talented Mr. Ripley and the Ocean's series, but it wasn't until playing Jason Bourne that he became a bankable, legitimate star. Since then, he has gone on to other acclaimed roles such as Syriana, The Good Shepherd, and The Departed, Invictus, Hereafter, and True Grit. He also showed an aptitude for comedy when he starred in The Informant! and Stuck on You, plus his memorable cameo in EuroTrip. He was also one of the two actors in Gerry.

When he first started out acting he said that his desire was to have everyone look at him and say "Matt Damon, now there's a hard working guy." He has received multiple award nominations for his film performances and has received a star on the Hollywood Walk of Fame. Damon is one of the top thirty-five highest grossing actors of all time. In 2007, he was named Sexiest Man Alive by People magazine. Even he claimed to be scratching his head over that one. Of course, it should be noted Boston guys have been getting laid a whole lot more since he's been around.

He was also one of the celebrities mocked in Team America: World Police. Matt Damon! Somewhat amusingly, he was actually supposed to be portrayed favorably in it. Then the puppet came out looking the way it did... Don't worry, he thought it was hilarious and said he would've voiced himself if Trey Parker and Matt Stone had just asked.

He also has a long-running feud with Jimmy Kimmel on Jimmy Kimmel Live! due to Jimmy frequently running out of time for him.