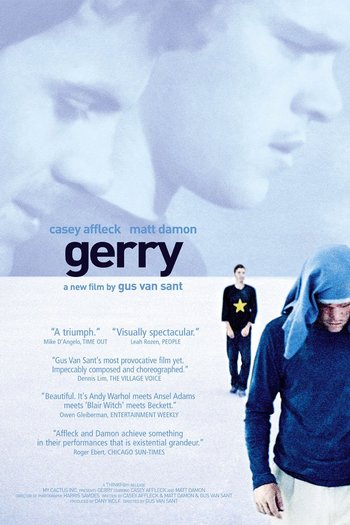 Gerry (pronounced "Jerry", not "Gary") is a 2002 American drama film directed by Gus Van Sant and co-written by him, Matt Damon and Casey Affleck, the latter two being the stars of the film and people that were heavily involved in its production.

The film tells the story of two men who both go by Gerry that go hiking in New Mexico to see "the thing" at the end of a trail. Eventually, upon failing to find this "thing", they decide to head back but in the process realize that they have become lost. Over the course of the next few days, their attempts to return to civilization without any supplies or provisions put their friendship to the test.

Gerry is likely as minimalist as a quasi-conventional character drama could possibly get, having limited dialogue, a barebones plot, a very patient pace, and a maximum of two people onscreen for almost the entire duration (barring a group of tourists seen early on). This style, frequently cited as an example of non-narrative cinema, was inspired by sources including the works of Béla Tarr, Jeanne Dielman, 23 quai du Commerce, 1080 Bruxelles, and Tomb Raidernote Van Sant has stated that he while he hadn't had much experience playing video games at the time of making the film, he was fascinated by the lack of the ability to cut away from the action in video games, which he believed meant that players had to stay with and follow characters during travel that would normally be skipped over in films.

The film's plot was loosely based on a real-life incident involving best friends David Coughlin and Raffi Kodikian, but explaining the incident's relevance here would spoil a major aspect of the film. In fact, Van Sant learned of the incident from Damon, who only told him the most general details of what happened, after which he consciously chose not to research it further to avoid making an adaptation of the two men's story.

The film is the first in Van Sant's Death Trilogy, followed by Elephant (2003) and Last Days.

Not to be confused with the 2011 film of the same name.

Tropes that apply to the film include: