Film / Stuck on You 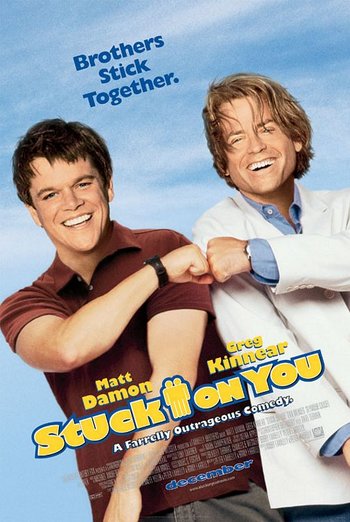 Whatever happens to these boys, one thing is certain. Nothing will ever come between them.
Advertisement:

Stuck on You is a 2003 comedy film directed by the Farrelly brothers and starring Matt Damon and Greg Kinnear.

Conjoined Twins Bob (Damon) and Walt (Kinnear) Tenor try to live as normally as possible. Outgoing and sociable Walt aspires to be a Hollywood actor, however, whereas shy, introverted Bob prefers the quiet life. After Walt gets a role in a local play (which gives Bob all kinds of trouble to stay as much as possible in the background) and the play is a success, Walt decides to follow his dream to Hollywood and persuades his hesitant brother to go along for the ride, which soon proves to provide both conflict and humorous situations.