Film / Behind the Candelabra 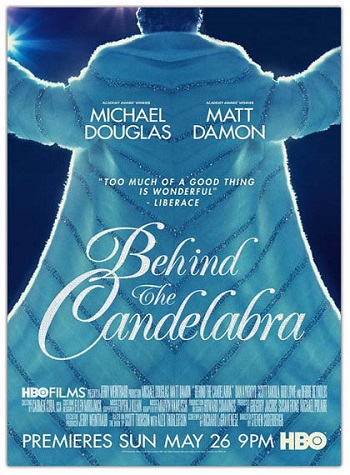 Behind the Candelabra is a 2013 HBO biopic film directed by Steven Soderbergh and starring Michael Douglas and Matt Damon. It details the tumultuous relationship between famed pianist Liberace (Douglas) and his much younger lover Scott Thorson (Damon). Their relationship starts out loving and caring, but eventually becomes strained due to Liberace's straying, his manipulative nature, and Thorson's drug use. The film is based on Scott Thorson's 1988 memoir Behind the Candelabra: My Life with Liberace.

Originally meant as a theatrical release, the film ended up being made at HBO, apparently because the major studios thought it was "too gay" (it did, however, get released in cinemas internationally). It premiered at the Cannes film festival to great reviews, particularly for the performances from Douglas, Damon, and Rob Lowe. Douglas received an Emmy, a Golden Globe and a Screen Actors Guild Award for his performance.

It was the final film to be scored by Marvin Hamlisch. It was also intended to be the last film from Steven Soderbergh prior to his retirement from filmmaking in 2013; he later returned in 2017 with Logan Lucky.