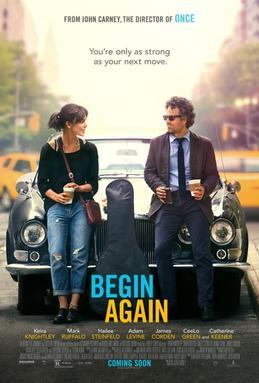 You're only as strong as your next move.
Advertisement:

Begin Again is a 2013 American musical comedy-drama film written and directed by John Carney and starring Keira Knightley and Mark Ruffalo. Knightley plays a singer-songwriter who is discovered by a struggling record label executive (Ruffalo) and collaborates with him to produce an album recorded in public locations all over New York City.

Carney began writing the film after the success of his 2007 musical film Once. The film was partly inspired by Carney’s own experiences as a musician in a band and his interactions with record label A&R executives in the 1990s. Keira Knightley, who had never sung professionally before, trained for her role with a vocal coach and learned to play the guitar.

The music for the film was composed by Gregg Alexander. The song “Lost Stars” earned an Academy Award nomination for Best Original Song.

Gretta: He's into you. So stop dressing like you're easy.