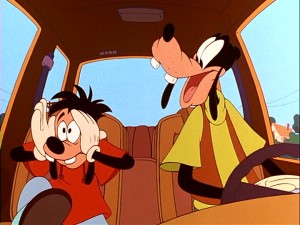 When your dad is Goofy...
"Guys, I don't suppose this is some kind of contrived paint-by-numbers adventure that's designed to force an emotional bond between me and my emotionally-stunted father, is it?"
— Hank, Community, "Advanced Advanced Dungeons & Dragons"
Advertisement:

Maybe he wants to make up for being away from home so often. Maybe he wants to understand what is in this kid's mind. Or maybe he just wants to prevent him from turning gay. Whichever reason he may have, one day Dad decides that he and Son should go out of the house and do something together! It will be fun, Dad says. And they will get to know each other better, won't that be great, old chap?

The problem is, Son is right now in an age where he isn't exactly very keen on doing uncool activities with uncool adults (or worse, being seen doing so). And Dad is of course the uncoolest adult there is! Since Son does not really have a say in the matter, he accompanies Dad of course. But don't expect him to just enjoy the day! He will instead react in one of these two ways: