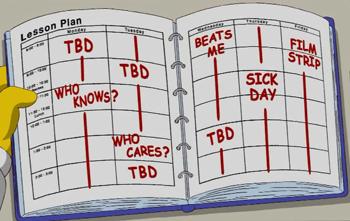 "Tutoring? Sorry, my schedule's packed."
"'Pick any moment from history and tell me about it. Be as creative as you like, or not, I don't care. Professor Cornwa...' He didn't even finish signing his own name!"
— Jeff Winger (on their final history project from Prof. Cornwallis), Community
Advertisement:

There are Badass Teachers, Sadist Teachers, Cool Teachers, Fired Teachers, and Enthusiastic Newbie Teachers...and then there's this guy. Jaded, misanthropic, and very likely a Deadpan Snarker, this is the teacher who's been in the job too long. He dislikes students in general — he's been there long enough to know they're thick and (usually) irritating. He hates the school, he hates the job, he really hates the management — but because he's known virtually nothing else, he still sticks at it, putting himself through it year after year.

Sometimes, this person started out as a young, Enthusiastic Newbie Teacher, who got beaten down by rowdy kids and an uncaring system. There's usually one person who will find that their no-longer-gives-a-shit attitude makes them a Cool Teacher anyway, or at the very least an occasional confidant. They're likely to seek solace in the bottom of a bottle. It's often implied, if not outright stated, that even their home life doesn't offer them much respite, either.

In pretty much all Save Our Students movies, one of these (if not an entire school of them) will serve as a foil to the idealistic teacher. If the school is an inner-city one, expect this teacher to be the one to make some remark about how they can't really expect anything from kids with this "background". Occasionally an apathetic teacher will be won over by the enthusiasm of an idealistic teacher and will start caring about the students too.

In psychology, these people are called "burnouts

Ms. La Bonz makes it clear to her students she does not like sacrificing her time for an overnight lock-in at an aquarium.

Ms. La Bonz makes it clear to her students she does not like sacrificing her time for an overnight lock-in at an aquarium.