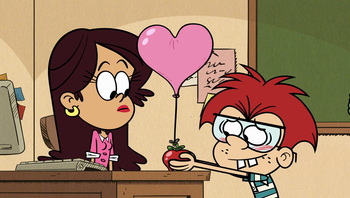 A common stereotype of schools is the Teacher's Pet giving the teacher a shiny red apple as a token of appreciation. Sometimes it's given to them directly in front of the whole class, or it can be placed on the teacher's desk in secret and anonymously.

A common variation is the class clown (or, conversely, the class bully) giving an apple with a worm inside to gross them out. A variation of this variation is to play a joke on the teacher by giving them an apple with gummie worm candies inside. Another common variation is for the student to give the teacher a chocolate-dipped, candy-coated apple as a Halloween, Christmas, and/or Valentine's Day gift (this works best during the winter, as the heat of the warmer summer, late spring, and early fall temperatures would cause the chocolate coating to melt). Further variations include giving the teacher apple pie, apple cider, or apple-flavored ice cream and/or frozen yogurt instead of actual regular apples in their purest traditional form.

Sometimes some other type of fruits appear as yet another variation, best if it's traditional fruit from the kids' (or their parents') gardens like pears or plums. Apples, pears, and plums are traditionally harvested in autumn, which makes them ideal gifts for teachers at the beginning of the school year. The trope seems to originate in a rule or a law from some communities: the village or town and its people were responsible for providing food for their local teacher.

Giving the teacher plain, traditional apples is now somewhat of a Discredited Trope, but the apple is still strongly associated with teachers (at least those teaching in elementary schools).