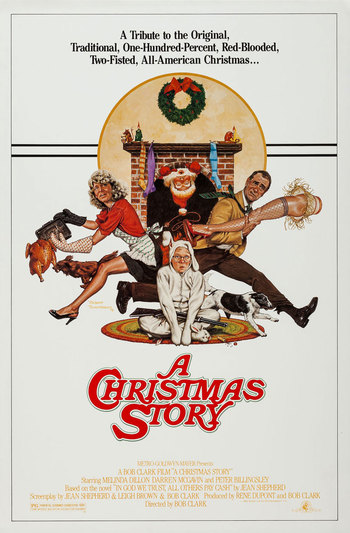 "Christmas was on its way. Lovely, glorious, beautiful Christmas, around which the entire kid year revolved."
Advertisement:

Based on humorist Jean Shepherd's autobiographical short stories, directed by Bob Clark, and narrated by Shepherd himself, the 1983 movie A Christmas Story lovingly and hilariously depicts a childhood Christmas in 1940s America.

Nine-year-old Ralphie Parker (Peter Billingsley) wants one thing and only one thing for Christmas: a BB gun. It's not just any BB gun he wants, either; his heart is set on an Official Red Ryder Carbine-Action Two-Hundred-Shot Range Model Air Rifle with a compass in the stock (and this thing which tells time). But his mother, his teacher, and even the department store Santa Claus tell him, in an ever-deepening refrain, "You'll shoot your eye out!" In the meantime, we are treated to a number of amusing episodes involving Ralphie, his parents (Darren McGavin and Melinda Dillon), his kid brother Randy (Ian Petrella), and various other inhabitants of Hohman, Indiana.

The film, which was primarily drawn from material in Shepherd's 1966 book In God We Trust, All Others Pay Cash, has come to be embraced as a perennial holiday favorite. It eventually spawned a play, as well as such sort-of sequels as the made-for-TV The Star-Crossed Romance of Josephine Cosnowski (1985) and Ollie Hopnoodle's Haven of Bliss (1988) and the theatrical It Runs in the Family (1994)note not to be confused with the Kirk/Michael Douglas collaboration), all of which are notable in that none of the original film's cast members appear in any of the others (save actress Tedde Moore [Miss Shields], who appears in the latter). A Direct to Video sequel called A Christmas Story 2 was released on October 30th, 2012. You can watch the trailer for it here

. A Screen-to-Stage Adaptation for the first film went to Broadway that same year, followed by another national tour the next holiday season. A live telecast of that same musical aired on Fox in December 2017. Information can be found on

That Other Wiki, of course. In January 2022, it was announced

that another sequel is planned for release on HBO Max, set around 30 years after the events of the original film and with Peter Billingsley returning as Ralphie. The new film, titled A Christmas Story Christmas, will be directed by Clay Kaytis, known for directing The Angry Birds Movie and The Christmas Chronicles. It apparently has no connection to A Christmas Story 2.

A Christmas Story provides examples of the following tropes:

...and THEN they'd be sorry

After being punished, Ralphie imagines an encounter with his parents during which they are remorseful for their excessive discipline of him.

...and THEN they'd be sorry

After being punished, Ralphie imagines an encounter with his parents during which they are remorseful for their excessive discipline of him.