Film / The Times of Harvey Milk 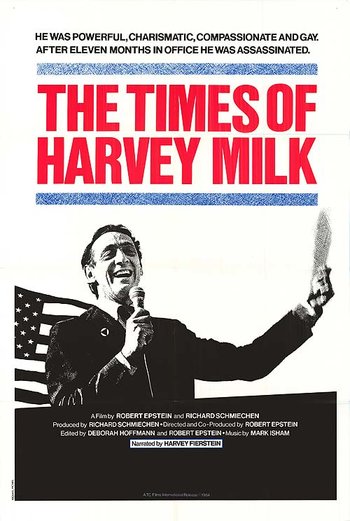 The Times of Harvey Milk is a 1984 documentary film directed by Rob Epstein and narrated by Harvey Fierstein.

It is about, yes, Harvey Milk

(1930-1978). Milk, a gay man and an activist for gay rights, was elected to the San Francisco Board of Supervisors in 1977, becoming the first openly gay man elected to political office in San Francisco and quite likely the first openly gay man elected to any political office anywhere in the United States. During his brief time in office Milk helped pass a landmark gay rights measure in San Francisco, and was instrumental in the defeat of the Briggs Initiative, a California ballot proposal that would have banned homosexuals from teaching in California public schools.

Milk had been on the board for less than a year when he and Mayor George Moscone were assassinated by Dan White, a conservative and a political opponent of Moscone and Milk. White infamously was acquitted of murder by a sympathetic jury, getting a manslaughter conviction that allowed him to be paroled after serving only five years.