Film / Tilt: The Battle to Save Pinball 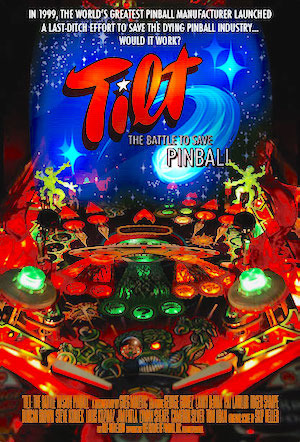 "Forget everything you knew about pinball. This is something entirely different."
— Advertising flyer, Revenge from Mars
Advertisement:

Tilt: The Battle to Save Pinball is a 2008 Documentary by former Apple manager Greg Maletic.

After blockbuster success in The '90s, Pinball manufacturer Williams Electronics hit a major sales slump in the second half of the decade as distributors stopped buying new games. Threatened with shutdown, the pinball design team (led by Larry DeMar, George Gomez, Pat Lawlor, and John Popadiuk) are challenged to come up with some kind of paradigm-shifting idea that will "save" pinball. Their response was a new platform called "Pinball 2000," which projected video images over the playfield and give a new level of immersion and activity. However, though the first two Pinball 2000 games (Revenge from Mars and Star Wars Episode I) were successful, Williams management decided to shut down the entire pinball division and focus solely on more profitable slot machines, leaving the pinball industry at near-death.

Interestingly, Maletic had originally intended only to create a documentary about how a product gets designed, and chose "Pinball 2000" because it was the most interesting subject he found. For casual viewers, Tilt is a short, intriguing glimpse into a critical period in Arcade Game history. Pinball fans are advised to get the two-disc DVD set, as the second disc contains nearly six hours of supplementary material of interest to die-hards.

This documentary features the following tropes: