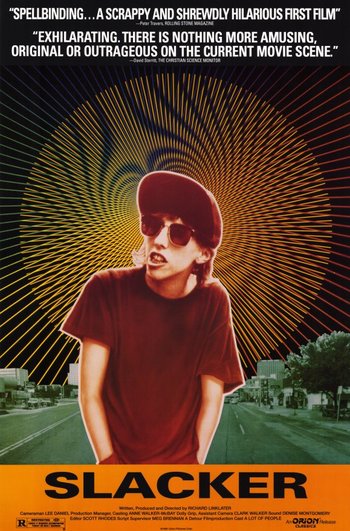 "I may live badly, but at least I don't have to work to do it."
Advertisement:

Slacker is a 1991 experimental film by Richard Linklater.

Set and filmed in Austin, Texas, it depicts a wide variety of slackers, paranoid conspiracy theorists, street philosophers, and other freaks and misfits as they go about their daily lives. The camera gravitates to a different group of people in every scene, giving the film a unique stream-of-consciousness style and painting a picture of the counterculture of the time. It was selected for preservation by the Library of Congress, so it must have done that right, at least.

Generally regarded as an important influence on the '90s indie film scene, specially dialog-heavy "mumblecore" movies. It was a direct influence on a then-22-year-old Kevin Smith and inspired him to make his own low-key microbudget flick.

Differs from The Slacker. See My Dinner with Andre for the film's inspiration, and Gummo for a film with a somewhat similar concept but very different execution.