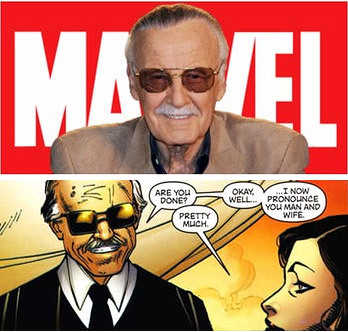 One popular form of The Cameo is to have a franchise's creator, or a film's director or producer, appear in the franchise itself.

Similar to Author Avatar, but an Author Avatar is a creator appearing as more or less themselves, as opposed to a cameo as someone else. Many comics will have their creators drawn in as background characters, although they rarely have dialogue. In video games, very likely to appear in any Developer's Room.

May lead to Death by Cameo. When the creator plays the part of an actual character rather than a simple cameo, they're a Descended Creator. See also Insert Cameo.

Jim Henson, the creator of the Muppets himself, gets his picture taken by Gonzo.

Jim Henson, the creator of the Muppets himself, gets his picture taken by Gonzo.