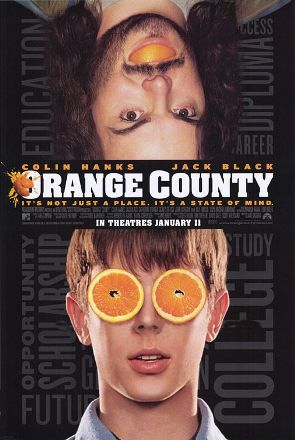 Shaun: But I have to go to college.
Shaun's Mom: WHY?
Shaun: Because that's what you do after high school.
Advertisement:

Orange County is a 2002 teen comedy written by Mike White, directed by Jake Kasdan and starring Colin Hanks, Jack Black, and Schuyler Fisk.note In other words, it was directed by Lawrence Kasdan's son, and stars both Tom Hanks' son and Sissy Spacek's daughter. Also in the cast are Catherine O'Hara, John Lithgow, Lily Tomlin, and Harold Ramis, among others.

Shaun Brumder (Colin Hanks) is just another surfer kid from Orange County, living with his Dysfunctional Family and getting high until his best friend Lonny dies in a surfing accident and he begins to seek more purpose in life. He then discovers a book on the beach, which changes his perspective. Discontented with his family, his school, and pretty much everyone in Orange County, he dreams of becoming an accomplished writer and works hard in high school in order to achieve his dream of studying with his idol, Marcus Skinner, at Stanford. However, his application is rejected due to an administrative error on the part of his college counselor, and he tries to get into Stanford via any means necessary with the help of his family and his girlfriend. Hilarity Ensues.

Not to be confused with The O.C., which is unrelated despite the same setting.