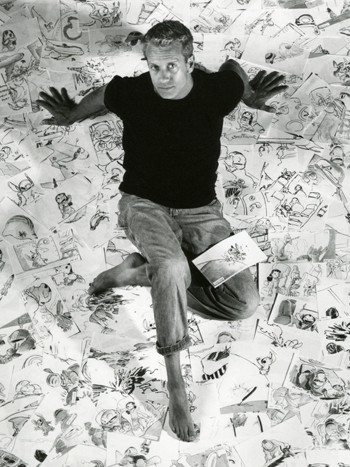 Christopher Michael Sanders (born March 12, 1962) is an American film director, story artist, comic strip artist, illustrator, and voice actor, noted for his distinctive art style and managing to earn massive success with two of the biggest animation companies today: Disney and DreamWorks Animation. He worked extensively with the former during The Renaissance Age of Animation, and achieved success with directing partner Dean DeBlois on his brainchild, Lilo & Stitch, and has also been the voice of every appearance of Stitch (except in East Asia). In 2006, however, he left the company after being removed as the director of American Dog (which would later become Bolt) and went to work with Disney's greatest rival—DreamWorks—teaming up once again with DeBlois to work on How to Train Your Dragon, his biggest financial and critical success to date. After writing and directing The Croods with Kirk DeMicco and later having its sequel's production canceled (only to be later revived without either man as directors), Sanders worked on his first solo and live-action/CGI-animated project, an adaptation of The Call of the Wild, which was produced by 20th Century Studiosnote the first film under that banner after Disney dropped "Fox" from "20th Century Fox" and 3 Arts Entertainment. Due to Disney's acquisition of 21st Century Fox on March 20, 2019, this film also marked Sanders's return to Disney (outside of voice acting as Stitch) after having left the company 13 years prior.note Although, even with John Lasseter—the man who took Sanders off American Dog in the first place, which in turn led to Sanders' falling out with Disney—now out of Disney altogether, and the expected live-action remake of Lilo & Stitch, don't expect Sanders to actually stay with Disney again. Sanders always had issues with Disney and the way it manages things going all the way back to the 80s; in some ways, Lilo & Stitch wouldn't have been made if Disney did not let Sanders make his film with such little executive oversight.

You can visit his blog here,

to see his all his personal links.

Productions (with TV Tropes pages) that he worked on or played a role in:

Video Games (all as the voice of Stitch)

Tropes related to Sanders and his work: