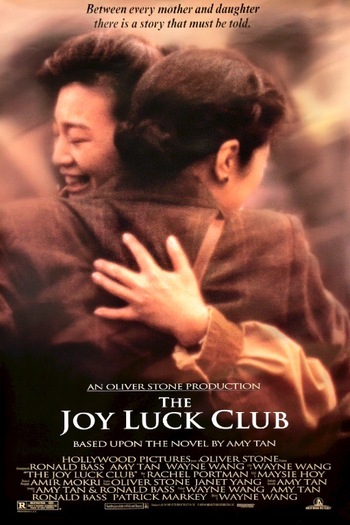 The book centers around four mother-daughter pairs living in San Francisco. The mothers are Suyuan Woo, An-Mei Hsu, Lindo Jong, and Ying-ying St. Clair. The daughters are, respectively, Jing-Mei (June) Woo, Rose Hsu Jordan, Waverly Jong, and Lena St. Clair. All of the mothers immigrated from China during their lives, and much of the book talks about their relationships with their mothers, with the exception of Suyuan Woo. The book is structured in sixteen chapters, each narrated in first person by one of the characters; the first four are told by the mothers, the next eight are told by the daughters, and the last four are told by the mothers, all with the exception of Suyuan Woo, who is dead at the beginning of the novel, so Jing-Mei takes her chapters. Most of each chapter is dedicated to a flashback of the narrator's childhood, usually regarding a particular incident or series of events involving that character's mother.

The novel was adapted into a 1993 film, executive produced by Oliver Stone and directed by Wayne Wang. It starred Ming-Na Wen, Tamlyn Tomita, Lauren Tom, and Rosalind Chao as the daughters, and Lisa Lu, Tsai Chin, Kieu Chinh, and France Nguyen as the mothers.

In 2020, the 1993 film adaptation got inducted into National Film Registry preservation list by the Library of Congress.

Film and book The Joy Luck Club provide examples of: