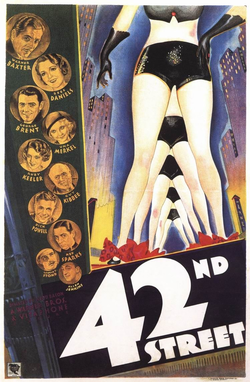 "Sawyer, you're going out a youngster, but you've got to come back a star!"
Advertisement:

A 1933 Warner Bros. musical with songs by Harry Warren and Al Dubin. It stars Dick Powell as Billy Lawlor, and Ruby Keeler as Peggy Sawyer, a young actress struggling to make it big on Broadway. Also features Warner Baxter as Julian Marsh, the show's stressed-out director. Ginger Rogers appears in her Star-Making Role as Annie, one of the chorus girls.

One of the earlier "show-within-a-show" movie musicals, it still holds up very well by today's standards.

Features tons of bizarre Busby Berkeley choreography, as well as a number of numbers that would literally be impossible to stage on... well, an actual stage. This set the precedent for Gold Diggers of 1933, Footlight Parade, and the other Warner musicals that immediately followed, made even more obvious by the fact that they all contained many of the same actors reprising similar roles.

Was adapted into a successful Broadway musical in 1980, with a revival in 2001.

Come and meet... Those dancing tropes:

Tropes for the Broadway Play Involve