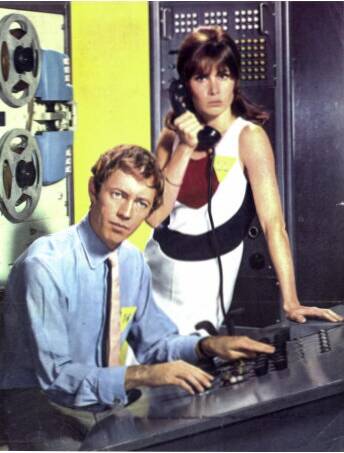 The Girl from U.N.C.L.E. is an American spy drama which ran one season (1966-67) on NBC, as the Distaff Counterpart to The Man from U.N.C.L.E.. It received a Poorly-Disguised Pilot in the second season The Man from U.N.C.L.E. episode "The Moonglow Affair", which featured Mary Ann Mobley as April Dancer, and Norman Fell as her partner Mark Slate. When the series was actually put into production, the leads were recast; Stefanie Powers played American U.N.C.L.E. enforcement agent April Dancer and Noel Harrison backed her up as British partner Mark Slate. The Man from U.N.C.L.E. veteran Leo G. Carroll reprised his role as U.N.C.L.E. Chief Alexander Waverly (one of the first times, if not the first, that an actor played a major role as the same character in two separate shows). Nowhere near as successful as The Man from U.N.C.L.E., the show was canceled for low ratings at the end of its first season; its broadcast coincided with a disastrous Screwed by the Network scenario in which the parent series was transformed into a comedy, causing its ratings to collapse and taking Girl down with it, though Man regrouped, reverted to being a more serious spy show, and limped along for a final half season.