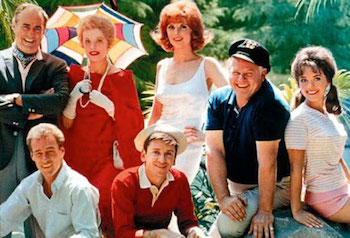 Gilligan's Island was created in 1963 by veteran TV writer/producer Sherwood Schwartz (who would later make a career out of The Brady Bunch). Schwartz was an academic with degrees in zoology and psychology, and originally intended for the program to be a meaningful examination of American life. Inspired by Robinson Crusoe, Schwartz intended to create a microcosm of American society by stranding representative members of different subcultures and seeing how they interact. He chose his representatives carefully, claiming later that "Anybody who is watching can identify with someone." How this ostensibly academic and rather intriguing concept turned into the show that actually aired is anyone's guess.note CBS president James Aubrey and his vice president of programming, Michael Dann, might have been responsible, as they believed audiences needed "bosoms, broads and fun". It lasted for three seasons on CBS (1964–67), then became a perennial favorite in daily syndication. With its timelessness and endless amount of reruns, the series firmly cemented itself and its beloved characters a place in pop culture history.

Three reunion TV movies followed, first rescuing, then re-stranding, then re-rescuing the castaways, who then turned the island into a resort. Two cartoon series, a stage musical, and a docudrama about the show’s creation were also produced. In the strangest twist, though, 2004 saw Gilligan's Island become the first (and maybe only) Sitcom ever revived as a Reality Show, with the broadcast of The Real Gilligan's Island on TBS...a show which combined the original series with Survivor in a bizarre blend.

Some of the cast reportedly disliked the show. The actress that portrayed Ginger (the movie star), Tina Louise, refused to do either the cartoons or the reunion movies because she considered the show "silly" and the concept ridiculous while also resenting that she'd ended up being typecast. (She had, according to Dawn Wells, also been lied to by the producers who had told her that the show was about a movie star stranded on a desert island and that Ginger was the central character.) Ironically, with the death of Dawn "Mary Ann" Wells on December 30, 2020, Tina Louise is the last surviving member of the cast.

A big-screen adaptation is currently trapped in Development Hell after an initial release date of March 30, 2012.

Not to Be Confused with Gullah Gullah Island.

Just sit right back and you'll read some tropes:

Now, this is the tale of our castaways, they're here for a long, long time
They'll have to make the best of things, it's an uphill climb
The first mate and his skipper, too, will do their very best
To make the others comfortable in their tropic island nest
No phone! No lights! No motorcar! Not a single luxury!
Like Robinson Ca-rusoe, it's primitive as can be!
So join us here each week, my friends, you're sure to get a smile
From seven stranded castaways, here on Gilligan's isle!