Hunting the Most Dangerous Game 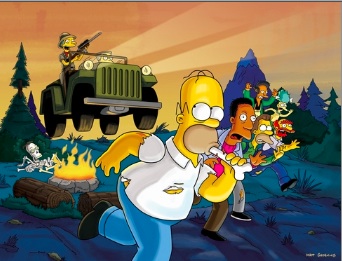 Typical company picnic for the Springfield Nuclear Power Plant.note And some extras.
"Gentlemen, they're large, they're fast, and fucking you up's their idea of tourism."
— Will Traeger, speaking about... well, guess who, The Predator

Subgenre of The Chase where the villains are hunters and the hero is the prey — the game — in a formalized hunting motif.

Most action series have a Hunting the Most Dangerous Game episode as well as a Forced Prize Fight. Villains may get victims from any walk of life, typically kidnapping Innocent Bystanders, buying Condemned Contestants, or tricking friends/enemies/the soon to be ex-wife into an isolated spot. The hunter is likely to do things that will give the victim more of a "fighting chance" to survive for a while, whether this means releasing them from a cage into that isolated spot in the wilderness (with a "head start" like "You have one hour to prepare before I start tracking and hunting"), or, often enough, providing them with a weapon or tools. Aside from providing a good dramatic sequence, this type of episode can also become a Green Aesop about sport hunting. Sometimes an Anvilicious one.

If it's an actual contest, you're talking about Deadly Game, though it should be noted that the term "game" as it is used in this trope refers to the hunted species, rather than the hunt itself. The villain often is an Egomaniac Hunter for whom sapient game is the ultimate hunting thrill, or an evil aristocrat or other rich guy who gets off on the sadistic thrill of hunting down and killing those they consider "lesser" than them. In science fiction works, this is frequently the modus operandi of a Predator Pastiche.

The Trope Namer is "The Most Dangerous Game", a classic short story in which a big game hunter becomes the prey of a retired Russian general who hunts humans for sport on his private island.

Expect the villain to motivate his prey by promising he can "Win Your Freedom" by surviving X amount of time. Whether he's being truthful or not, the story rarely actually ends with the hero simply winning his freedom and leaving, because then the villain would get away with it — true resolution of this deadly game will usually only come with the villain taken down and either arrested or killed.

The Wild Hunt may be one of these. See also Blood Knight for someone who is more of a warrior than a hunter. When this is someone's job instead of a sport or hobby, see Bounty Hunter and Professional Killer. Villains who go so far as to have an MO and do this often enough are practicing Industrialized Evil. See also Serial Killer, who usually drops the overt hunting motif but still maintains the spirit of the trope, especially if they engage in cat-and-mouse games with their victims.