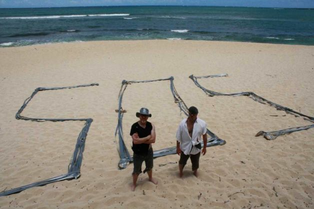 "I reject your page image and substitute my own."
Advertisement:

A character(s) stranded on a Deserted Island (or a desert) builds a message with sticks and/or stones for a passing plane to see. It usually reads "HELP", although "SOS" is common as well.

Frequently parodied by the character writing a much longer message than necessary, mispelling a word, or having some other wacky problem.

This is Truth in Television, as any large and apparent ground-to-air signal can attract the attention of an aerial search. Many people are unaware that the international symbol is a clear X shape.

Sister Trope to Message in a Bottle. Related to Deserted Island.