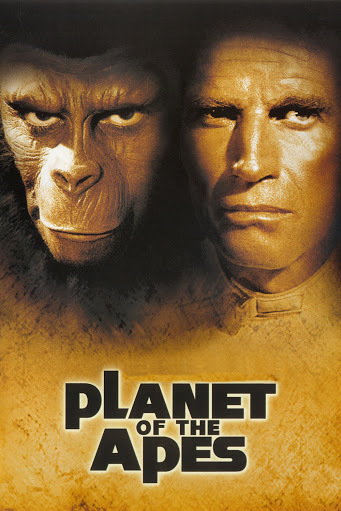 "Take your stinking paws off me, you damned dirty ape!"
— Colonel Taylor
Advertisement:

Adapted from Pierre Boulle's novel, co-scripted by Rod Serling, and directed by Franklin J. Schaffner, this classic 1968 sci-fi film launched a screen franchise that has continued, with various sequels and reboots, into The New '10s.

A team of astronauts flies into space at near light speed. They are influenced by time dilation: eighteen months for them is over two thousand years for the Earth. They crash onto a mysterious, seemingly desolate planet (losing the sole female on the crew in the process), specifically into a dead lake; this loses them their spacecraft and most of their supplies.

On this planet, there is a mute race of human-like creatures, treated as animals by a race of sentient English-speaking apes. Caught in the middle of an ambush between Ape and Man, one of the astronauts is killed, another lobotomised and a third, Col. George Taylor (Charlton Heston), is shot in the throat, which renders him mute like the other men. He is among the captured men, and taken back to the apes' mostly pre-industrial city. As the talking ape civilisation learn that Taylor, "Bright Eyes" to them, can (eventually) speak and write, they put him on trial for heresy against the ape civilisation's sacred scrolls.

Notable for its famous Earth All Along ending: Taylor escapes from the apes, finding a new life with his love Nova, and eventually discovers the ruins of the Statue of Liberty. He realizes that humanity destroyed itself in some iteration of World War III, sent the planet back to the Stone Age, and allowed the apes to conquer.

The sequel to this movie, Beneath the Planet of the Apes, was released in 1970.

Example of:
Humans Are the Real Monsters