Western Animation / Pinocchio and the Emperor of the Night 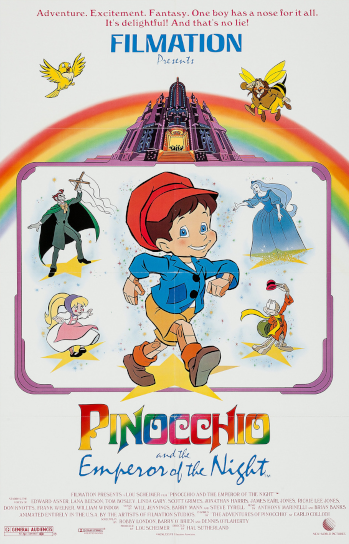 A 1987 animated feature released by New World Pictures and made by Filmation.

One year after becoming a real boy, Geppetto feels Pinocchio's ready to take on some responsibility, and so entrusts him with a delivery job: take a hand-crafted jewel box to the Mayor. Unfortunately, he instead trades the box away to a pair of con artists he meets on the road, in exchange for a big, shiny — and fake — ruby. Geppetto, upon finding out, is somewhat less than pleased.

That night, a guilt-ridden Pinocchio runs away from home to join the mysterious carnival that sprung up overnight. It's run by a totally upright, trustworthy, not-creepy-in-the-least puppetmaster (named Puppetino) who tempts Pinocchio into a dance with Twinkle, "The Most Beautiful Puppet In The World"... if he shows him what he can do first. What follows can only be described as an exercise in creepy, as Pinocchio is forced to dance as he watches himself turn back into a puppet.

If the viewer hasn't been scared into shutting the movie off yet, the Blue Fairy comes in and makes everything better, after a brief but stern reminder about "The Power Of Choice" and an amusing callback to the original tale as he tries to explain just how he got into that predicament in the first place. Pinocchio, now flesh-and-blood again, immediately decides to prove his newfound sense of responsibility... by going out to get the jewel box back.

A series of hijinks (and a Wacky Wayside Tribe for his sidekick Gee Whillikers, a wooden bug brought to life) later, Pinocchio finds himself in the ominous Empire of the Night, being tempted onto a gondola by a mysterious figure. Again, Pinocchio's excellent judgment shines through as he decides to make a pit stop in "The Land Where Dreams Come True" — a particularly acidic Disney Acid Sequence. Despite the strangeness of the place, Pinocchio finds all his wishes are granted... the opportunity to have fun with no rules, an unlimited supply of toys, and fame and fortune. But of course, there's a price...

The movie is ostensibly a sequel to the classic tale, but it's more of a Mockbuster of the Disney version than that: It has Funny Animal con artists, a Jiminy Cricket-esque conscience figure, a sadistic puppetmaster, a place where kids are free to do whatever they like for a price, a titanic battle on the high seas, and a few musical numbers. Disney noticed and sued Filmation for copyright infringement; they lost, as the original Pinocchio story was written by Carlo Collodi and out of copyright.

The film opened on Christmas Day 1987 and was a commercial failure — it cost $8 to $10 million to make, but only earned $3.3 million domestically. However, it retains a small but loyal cult following; fans of the movie will point out many differences between the two films, one of which is this film's Aesop about the power of choice, and the theme of temptation as a form of captivity. They'll also cite the Darker and Edgier nature of the opposition; in particular, Puppetino's transformation of Pinocchio and the appearance of the eponymous Emperor of the Night are unique, impressive, and terrifying to this day.

See also two sister Filmation productions: Journey Back to Oz, a sequel to The Wizard of Oz, and Happily Ever After, a sequel to Snow White and the Seven Dwarfs produced at the same time as this film (and which Disney had more success in driving into obscurity).