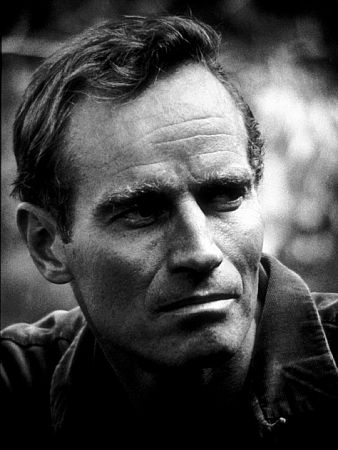 John Charles Carter,note  You know you're awesome when your real name's every bit an Awesome McCoolname as your stage name! better known as Charlton Heston (October 4, 1923 – April 5, 2008) was an American actor. He was once described by Orson Welles as "Hollywood's Only Boy Scout" due to his diligence as well as being a genuinely Nice Guy.

He's best known for his leading roles in Epic Movies of the late '50s and early '60s, as well as some notable Science Fiction movies such as Planet of the Apes and Soylent Green. Big Damn Hero moments happen a lot in his films, and he was something of a Mr. Fanservice as well (having had quite a few Shirtless Scenes to show off his Carpet of Virility in his career). He is sometimes unfairly dismissed as a Large Ham due to his tendency to play larger than life heroes and bellowing epic dialogue with that Badass Baritone voice of his - though in some cases that's exactly why his fans love him. The man was very fond of William Shakespeare's plays and it showed.

In an interesting case of What Could Have Been, a handful of his films were originally offered to Burt Lancaster, specifically Dark City (Heston's film debut), Ben-Hur (for which Heston won his only Oscar for best actor), The Agony and the Ecstasy, and Khartoum.

Heston was also known for his political activism. In The '50s and The '60s he was one of a handful of Hollywood actors to speak openly against racism and was an active supporter of the Civil Rights Movement. Initially a moderate Democrat, he later supported conservative Republicans and was president of the National Rifle Association from 1998 to 2003. The (in)famous "You'll get my rifle when you pry it from my cold, dead hands!" has angered many gun control advocates while Michael Moore's controversial Bowling for Columbine seemed to hurt his image with some modern audiences. Sadly, he was also accused of being a homophobe later in life due to his apparent disagreement with the Ho Yay subtext of Ben-Hur and evidence suggesting the painter Michelangelo Buonarroti, whom he portrayed in The Agony and the Ecstasy, had been gay, even though Heston himself vehemently denied being a homophobe. Despite his critical stance on political correctness and affirmative action, he never preached what he couldn't practice, being able to shrug off a snarky comment by George Clooney regarding his Alzheimer's affliction.

He was a large man with a deep voice and genuine off-screen gravitas. When he met George MacDonald Fraser at the premiere of The Three Musketeers, he introduced himself from behind the writer by saying, "I'm Charlton Heston." Fraser turned around, startled, and replied, "By God, so you are!"

He passed away in 2008 a few months short of what would have been his 85th birthday due to complications from Alzheimer's and pneumonia. He is survived by his wife, Lydia Clarke (who also dabbled in acting for a time and even appears in 1968's Will Penny, which Heston often cited as his personal favorite in his career), son Fraser Clarke (who actually played the infant Moses in The Ten Commandments and dabbled in screenwriting and directing for a time), adopted daughter Holly and a brood of grandchildren.

Example of:
The Secret of Long Pork Pies