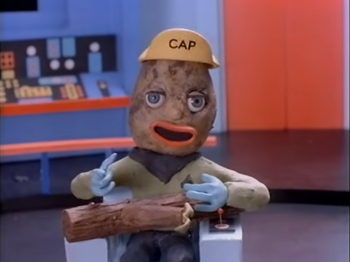 A voiceover of the lead character talking out a journal or diary entry. At the beginning of the show, this is used to allow the main character to be Mr. Exposition, or to remind watchers of a Story Arc of which the current episode is a part.

Given that this usually supposed to be an official record of a commander's duties, there's some opportunity for humor when he experiences some embarrassing problems or has to make a difficult decision. In that situation, he often has to struggle to phrase his log recording in a way that could downplay it without getting into trouble for writing a false report.

In the beginning of the show, it's used to quickly establish exposition and the background of the story, and perhaps mention a Chekhov's Gun.

In the middle of the show, it's used to move slow plot points forward (usually things that you suspect were once scenes but were cut for time, budget and/or script pacing).

At the end of the show, it's used to sum up the plot and deliver An Aesop.

One element of this trope that often goes unexplained is the question of when the character had the time to make all of these entries (always in present tense) while in the middle of said dangerous situations. Especially when he wouldn't plausibly have any down or quiet time, let alone access to a recording device. Is he keeping a log in his head?

If it's being used for exposition purposes when the viewpoint characters are Late to the Tragedy it probably fits better under Apocalyptic Log, but the two can overlap. Compare Private Eye Monologue, a similar narrative style typically used in Film Noir, and Recap by Audit, in which the description takes the form of financial report.

Has absolutely nothing to do with a Ninja Log.