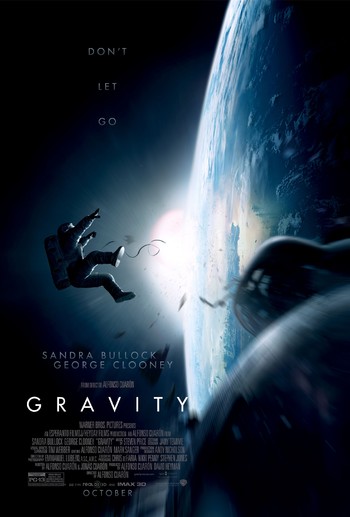 It says "DON'T let go", and what do you do?
At 600 km above planet Earth the temperature
fluctuates between +258 and -148 degrees Fahrenheitnote or 125.6 and -100 degrees Celsius.
There is nothing to carry sound.
No air pressure.
No oxygen.
Life in space is impossible.
— Opening Monologue Card
Advertisement:

Gravity is a 2013 sci-fi thriller film directed and co-written by Alfonso Cuarón and starring Sandra Bullock and George Clooney.

Two astronauts, Dr. Ryan Stone (Bullock) and Matt Kowalski (Clooney), are with the Space Shuttle Explorer on a routine mission to upgrade the Hubble Space Telescope when the Russians decommission one of their satellites by shooting it down. As debris from the satellite spreads, the ensuing Disaster Dominoes result in Houston losing their own radio satellites, the Explorer suffering catastrophic damage and Ryan and Matt being stranded in space and short on oxygen.

And that's just the first (13-minute-long) shot of the movie.

Among many other honors, the film was nominated for ten Academy Awards and won seven, including Best Director for Alfonso Cuarón. While it lost Best Picture, Actress and Production Design, it still went a long way in beating down the Sci-Fi Ghetto.

Also related to the film is the short film "Aningaaq," detailing a scene in the story from a minor, earthbound, character's perspective. The short was directed by Cuarón's son and the film's co-writer, Jonas Cuarón. It was commissioned as a bonus feature on the film's DVD/Blu-Ray release for consideration in the Best Live-Action Short Film Oscar, but didn't get nominated. It can be watched here

, however it makes more sense after seeing the connected scene in Gravity. Tropes in "Aningaaq" are listed at the bottom of this page.