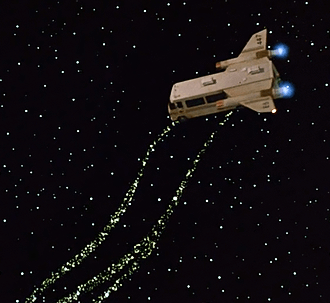 "So you can just slow down and make a sharp left in space?"
— Crow, Mystery Science Theater 3000
Advertisement:

Isaac Newton turned the world of physics upside down when he observed his first law of motion:

A body in motion will tend to stay in motion, in the same direction and at a constant speed, unless acted upon by an outside force.

This was earth-shattering stuff when he introduced the notion — in 1687! Sadly, most writers for science fiction TV shows and films are apparently still stuck in Aristotelian physics — according to which a body in motion will always slow down even in a vacuum — and just don't get a single clue of how proper Newtonian physics work.

However, the reason these things happen is friction. note And also air resistance, though this usually only becomes relevant if you're traveling at near-sonic speeds. On a straight road, with good tires, you can coast quite a long way on even a slight downgrade. In space, where there is no friction between the car and air to contend with, you can coast even at top speed almost forever (albeit perhaps not in a perfectly straight line, due to gravitation), or until you hit something, which, given how big space is, is literally astronomically unlikely.

For that matter, the entire notion of only having enough fuel to travel so far is a little suspect: if you've got enough fuel to reach top speed, you've got enough fuel to go anywhere; once you reach top speed, you can just shut the engine off and coast, though this is assuming you're flying along a ballistic trajectory. Of course, it would become a problem if you don't have enough fuel to stop at the end — or if, for whatever reason, you have to turn somewhere, or if your engine fuel doubles as power generator fuel, which would cause a black-out in your ship (which, if it comes up in a Space Friction plot, generally means the crew has a few hours to restore power before running out of air). Even so, this would result in a broken-engined ship perhaps missing its target or crashing into another, not stopping dead.

Exotic propulsion systems of the sort needed to exceed the speed of light are exempt from the normal laws of physics and can reasonably be presumed to expend energy even at a constant speed, just holding the laws of physics in check, but it's curious that the effects of such drives always cause space to behave exactly like an ocean—a ship said to be "adrift" will be moving at a random (low) speed and direction or practically not moving at all.

And then they see examples of spaceships with wings.