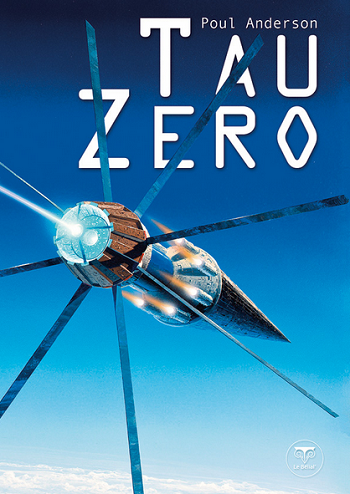 A somewhat hard Science Fiction novel by Poul Anderson, written in 1970. It is based on a 1967 short story "To Outlive Eternity".
Advertisement:

The starship Leonora Christine is supposed to carry its 50 colonists to a distant star. The journey should take 33 years, but due to Time Dilation at near-light speed, only 5 years will pass for the crew. Then things go to hell when the ship collides with a nebula (due to the mass of the ship and nebula at that speed, it's like hitting a solid object); the ship's decelerator system is damaged, so they can speed up (and steer) but can't slow down.note They're on a one-way ride to wackiness! The ship will keep getting closer and closer to light-speed, reducing the passage of time onboard (their "Tau") to nearly zero. In the time it takes them to repair the damage and stop the ship, billions upon billions of years have passed and the universe is reaching the point of imploding (a "Big Crunch") and starting over with a new Big Bang.