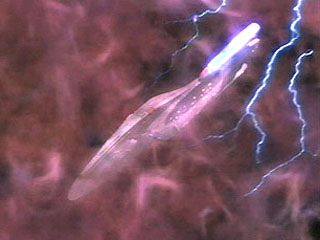 Today's space forecast: Cloudy with a chance of Negative Space Wedgies.
"Neither of us could have predicted, that cosmic storm."
— Scrooge McDuck, DuckTales (2017), "The Last Crash of the Sunchaser!"
Advertisement:

Far out in space, our hero's Cool Starship is on the run from the Big Bad and hides out in a nebula/gas field/whatever and is obscured from their pursuer's sensors. It's a misty realm where you may not even be able to see your own hand in front of your face. This trope is about what seems to be a common theme in nearly all Science Fiction shows: a (nearly) human-scale cloud that is inexplicably stable in space. To add to the drama, the cloud may also contain dangerous weather, with lightning bolts and the like.

In reality, nebulae and other "clouds" of interstellar matter are extremely sparse — they have only about one atom of matter per cubic centimeter of space. That's a trillion trillion times less dense than the matter you could expect to find on Earth or in a star. The only reason these nebulae appear cloudlike to us is their immense size and distance. A nebula can be many light years across, regardless of how compact it may look from Earth.

This trope has grown in popularity in direct proportion to the number and quality of images returned by the Hubble Space Telescope (and other observatories). It's quickly becoming a case of Reality Is Unrealistic. See Analysis for a comparison with real-life nebulae.

Compare Asteroid Thicket. Trope name is a meta-example of Space "X". An example of both Space Is Air (it's acting that way), and Space Is an Ocean (maritime tropes of drifting into dense fog being directly transposed onto spacefaring).

Enterprise and Reliant battle each other in the Mutara Nebula.

Enterprise and Reliant battle each other in the Mutara Nebula.