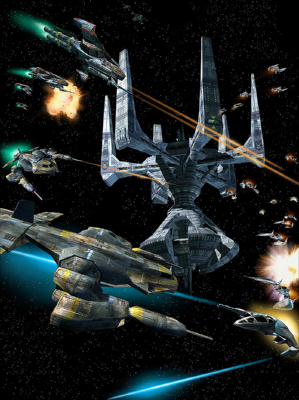 It is the 26th Century. Peace prevails in the Earth's solar system. Tachyon gates allow us to travel tremendous distances in mere seconds. This is the Golden Age of space exploration...
But there is trouble on the fringe of civilized space: Large corporations, desperate for new resources, threaten to overtake distant colonies. The colonists, fearing for their independence, respond with violence...
Life is anything but peaceful in the Fringe.
Advertisement:

Tachyon: The Fringe is a Space Flight Simulator made by NovaLogic in the year 2000, developed by Randy Casey (the maker of F-22 Lightning II). It follows the story of a 26th-century expert pilot Jake Logan, who lived a great contractor's career in our Solar System, flying freelance and fighting other people's fights.

That was of course, until something goes horribly wrong. An emergency escort mission goes south as a hospital gets destroyed, and Jake ends up being the fall guy. He is subsequently exiled from Sol (with a very short trial) to a colonized region of space called the Fringe. Eventually, Jake gets a new life together, and the player controlling him has to pick a side, which is either the Galactic Spanning Corporation, or the Bora Mining Guilds, who are in a war of territorial claims. One does it all for the sake of money, the other does it to protect their territorial rights.

Tachyon is unique, not like the other games by NovaLogic, because it takes place in space, does not have a sequel, and is the only game that does not have to do with anything by the United States Military. Not to mention a definitive storyline.

There is a remake of this game in progress

, based on the FreeSpace 2 Open Source Project. (Don't get your hopes up; as with most such hobby projects, it's been going on for a while and the implementers don't seem to have any time to spend on it.) Fortunately, unlike a certain other space dog-fighting game, you won't have much trouble installing the real thing anyhow.

Tachyon: The Fringe contains examples of the following tropes: