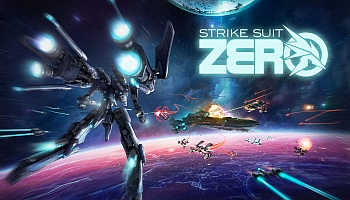 "Strike Suit Zero is essentially Macross Missile Massacre: The Game — and those massacres are glorious to behold."
— GameSpy's review

Strike Suit Zero is a Space Combat Sim funded on Kickstarter and released in 2013. You are the pilot of an experimental "Strike Suit", essentially one of the fighters from Robotech or Macross. In a war between Earth and Space Colonies, Earth's fleet has been decimated by a Colonial super-weapon with the ability to destroy planets with a single shot. Arriving too late to see the destruction, you still show up in time to defend the couple of surviving capital ships from the Earth fleet. The weapon is now headed for Earth, and it is up to you to prevent Earth's destruction.

, focusing on survival mode and racking up points from killing endless waves of enemies.

An updated version titled Strike Suit Zero: The Director's Cut was re-released with loyalty pricing on Steam in 2014, as well as on the PlayStation 4 and Xbox One. The Director's Cut has a redone campaign with restructured missions; one of the most notable differences is the player acquiring the Strike Suit earlier.